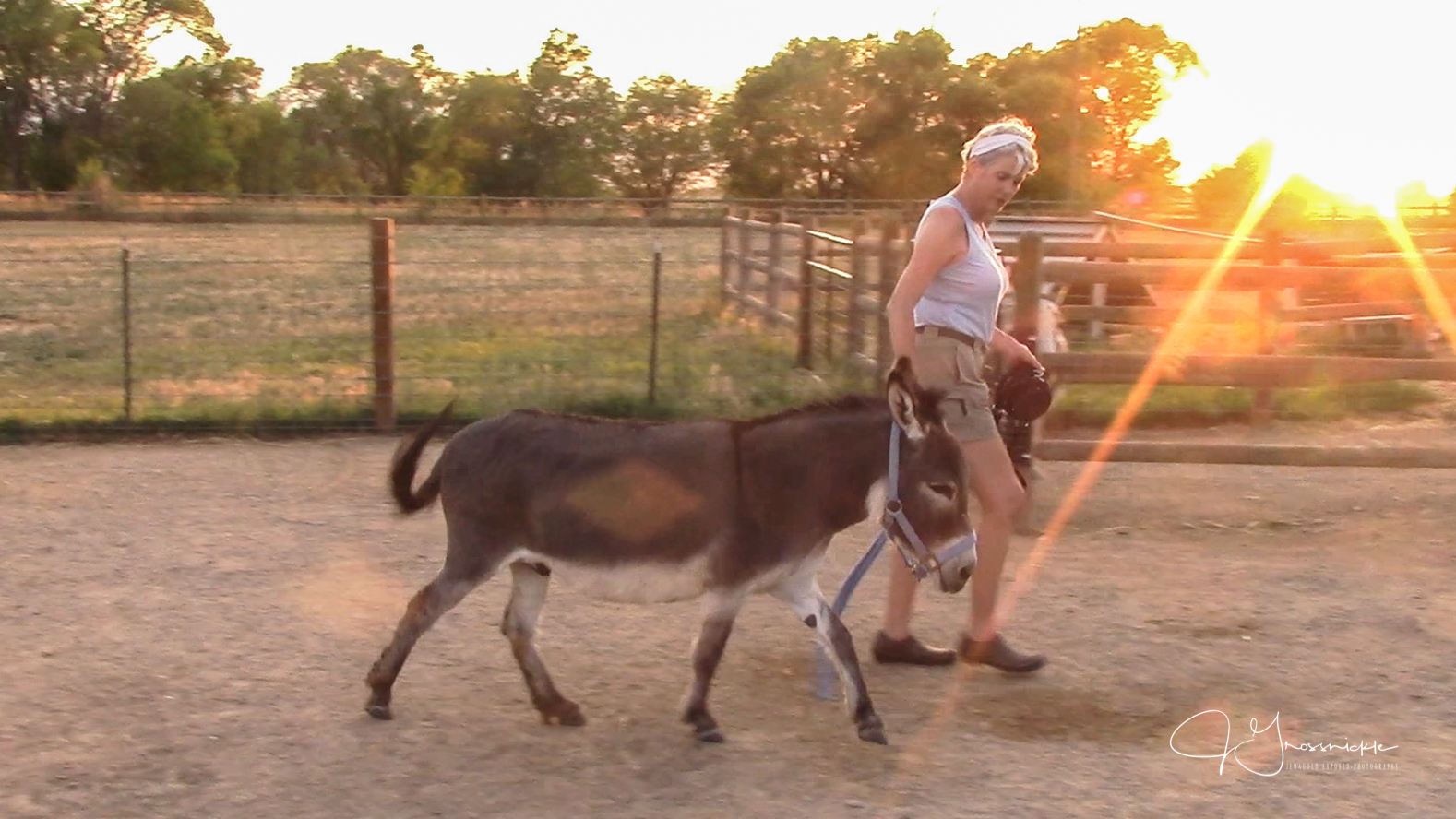 It was a big day in caring for my two donkeys, Jack and Jill. I knew what I had to do: get fly spray on them (not an easy thing to do with Jack), de-worm them (again, I know Jack is wary and difficult to de-worm), then get their grazing muzzles on so they could get some exercise in our pasture.

I know it is my fault that I do many things with the donkeys, especially Jack, without haltering him/them. This has caused Jack to avoid being haltered which makes me look ridiculous. I’ve tried “just doing it” and I’ve tried waiting to let it be “his” decision to be haltered. My latest approach is that after I halter him, I hand-graze him or do some other activity that he enjoys in hopes he associates being haltered with pleasant/positive activities. I think much of Jack’s avoidance in being haltered is a game for him. He wants my attention so he is playing with me in avoiding being haltered. Such a funny fellow!

We’ve tried “tying up” Jack after being haltered to get fly spray on. This has led him to avoid walking to any area/post that he has been previously tied on when getting sprayed. With the memory of an elephant, he distrust walking to any of these areas once haltered. My new way of spraying Jack is… I just do it. Wherever we are, I approach him with the fly spray bottle, allowing him to see the bottle so he knows what I’m about to do. I’ve been told that they eventually learn that being sprayed results in less agitation from the biting flies but I’m still waiting for him to make this connection. Now this may not seem like a “positive” after getting him haltered but I’m hoping that my interaction with Jack is the positive along with praise when he is in “thinking mode” and allows me to spray him.

For those unfamiliar with how equines think, horses and donkeys have a “reacting mode” and a “thinking mode”. The goal is to keep him in the thinking mode. As a “prey” animal, their first line of defense is to react to any possible danger. Desensitizing the donkeys to common things allows them to remember… “oh, that is okay. That isn’t going to try to eat me!” The other thing important to remember is that whatever you do on one side, you need to do on the other. The visual interpretation of potential danger needs to be desensitized on both sides for them to assimilate they are okay with that stimulus.

Successfully being able to fly spray Jack is a huge accomplishment for me. I still need to be able to apply spray to his ears and face and to his tail and back of his legs better but for now, I’m thinking baby steps. Jack is allowing me to apply the spray with much less reaction then he used to do. In the past, it was a battle of wills. Now, he doesn’t like it but he allows me to spray him. I’m taking that as a huge success!

Next is putting on their grazing muzzles. Neither like them but both allow me to put them on to be able to go out in the pasture. For Jack, being out in the pasture is more about stretching his legs and running. For Jill, she heads to the bare ground they’ve made where she rolls in the dust probably to get rid of being sprayed? The dust coats their bodies to disguise their scent from predators. These dust baths are very important for their mental and physical health even though they become dusty/dirty.

Watching the sunset while sitting out at the barn has got to be the most relaxing, enjoyable thing to do. It is the calm of the day as the birds get settled for the night in the trees around us. My barn cat, Gusto, emerges from his hiding place to greet us and let us know he is taking care of his barn duties. On this day, Jill is less interested in being out in the pasture and wanders back in the paddock. I remove her grazing muzzle and re-halter her in preparation to de-worm her. First, we use the weight tape to estimate her weight for the proper dosage. I’ve been told my donkeys are a bit “pudgy” hence the grazing muzzles. We are actively weighing their feed in attempts to help them lose a few pounds. I’m happy Jill’s weight is less than the last time I weighed her; we are making progress! De-worming Jill is easy.

Meanwhile, Jack is having fun trotting through the pasture. Although he knows how to graze wearing the muzzle, he is using this time to exercise. As it is getting dark and the mosquitoes are eating me up, even though I have bug spray on, it is time to bring Jack in. There was a time I was afraid to be out in the pasture with Jack “loose”. His trotting and kicking up his heels scared me. He would come to me as if I was a play mate for him and expect me to run with him. I used to feel very vulnerable out there with him. Now, I know how to stop him. We’ve worked on a 90/10 approach. He is allowed to race towards me 90% and then stop. I approach him the last 10%. Having this 10% bubble gives me the confidence that I am safe when out in the pasture with him.

As Jack races to me in efforts to get me to play with him, I walk away. Jack is curious as to where I am going? In reality, I’m walking the pasture looking at how the grass is doing with the high temps we’ve been having. Not having an irrigated pasture means an entirely different method of pasture management then if it was regularly watered or if we lived in a less desert climate. After one more zip across the field, Jack approaches me again. My energy is calm; I’m not playing with him. I approach him and pet his forehead feeling his energy. It is safe to attach my lead rope to his halter. Jack must have missed the cue because he bolts when we start walking. I quickly tell him to “whoa” and he complies. As we walk back to the paddock together, he presses his body up against my leg. I believe this is Jack’s way of connecting to me. I reach over his back and pet him. I feel connected to him too. 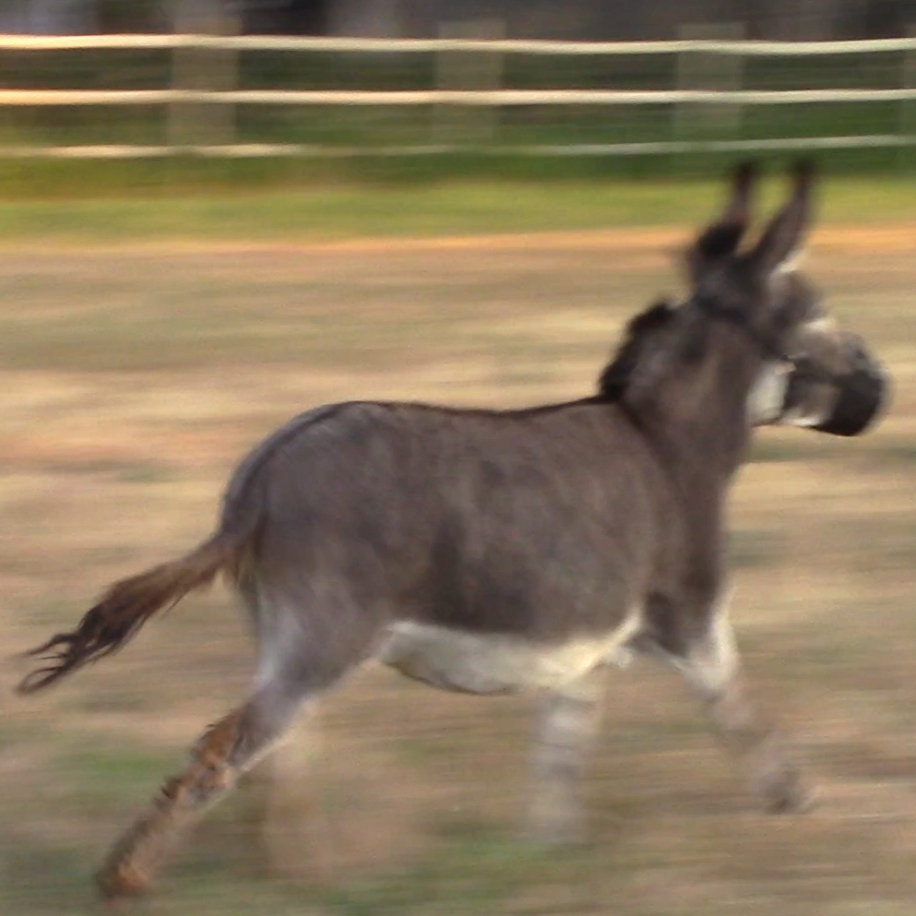 Jack LOVES to run and kick up his heels. 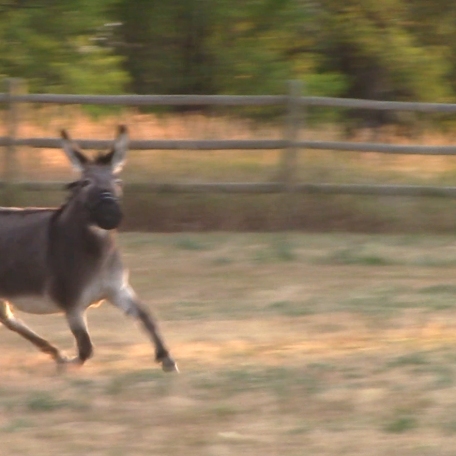 He turns back towards me; this is all a game for him. 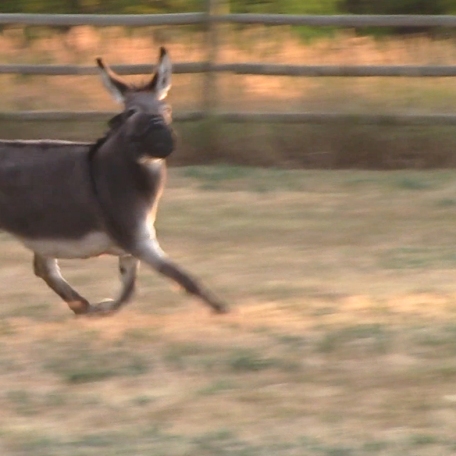 I love watching him run 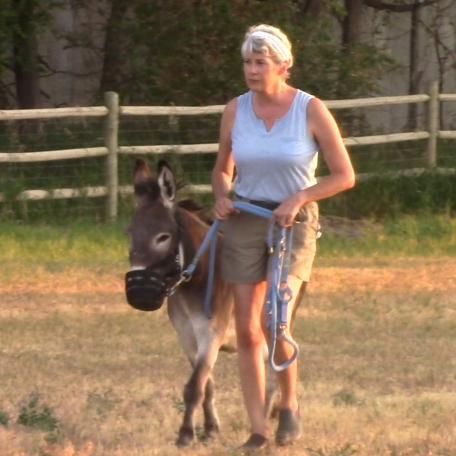 Jack walks with me perfectly 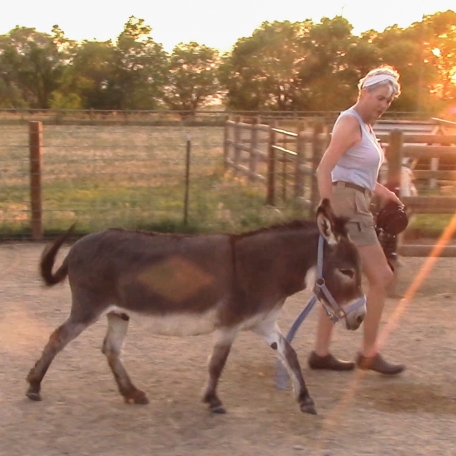 Heading back to the barn

Once back in the paddock, I exchange his grazing muzzle for his regular halter. And now I need to de-worm Jack. Again, we weigh Jack for the proper dosage. My method of deworming Jack is much like any other thing I’ve taught him. I want him to get into a “thinking mode”. I’m not going to cram the syringe into his mouth; I want him to take it himself understanding this has to be done and good things will follow. Because he is Jack, he “touches” the syringe first as if that is all he has to do. Then he opens his mouth but quickly pulls away. Nope, that is not the right behavior either. I know he knows what I’m about to do; we’ve done this many times. I wait for Jack to demonstrate the correct behavior. After several offers of various mouthing behaviors, Jack opens his mouth and allows me to insert the syringe over his tongue into the back of his mouth. It is at that moment that I plunge the syringe and tell him what a good boy he is. I gently lift his head helping him to swallow the meds, click and give him a treat. Holding his heal up while he chews the treat, I am assured he has swallowed the meds.

Even though I’ve given Jack a treat, I walk him over to an area behind a gate with tall grasses. Here, I allow him to graze on these grasses normally out of his reach. After several bites, I tell him enough and lead him away from this area. The gate is opened again and Jill joins us in the paddock. I un-halter Jack and he is free although he stays next to me for pats and scratches (and probably the hope for more treats?). Their feeding buckets are brought in and dinner is served.

As we prepare to leave the barn and head back into the house, Jack looks up from his feed bucket to watch me. As I get to the end of the paddocks, Jack stops eating and races over to say “good night”. I walk to the fence to give him one more forehead rub as he lifts his face presenting his nose to me. I lean over the fence to give his nose a kiss. It is such a sensitive part of his body that he exposes to me; soft as velvet. Does he know I have one more treat in my pocket? Maybe he does? I feed him this treat while telling him good night. As I walk to the house, I look back. Jack is watching me leave. One final backward glance and Jack slowly turns from watching me and heads back to his feed bucket. It’s been a successful night in caring for my sweet donkeys.

2 comments on “Donkey Duties: Caring for my Donkeys”