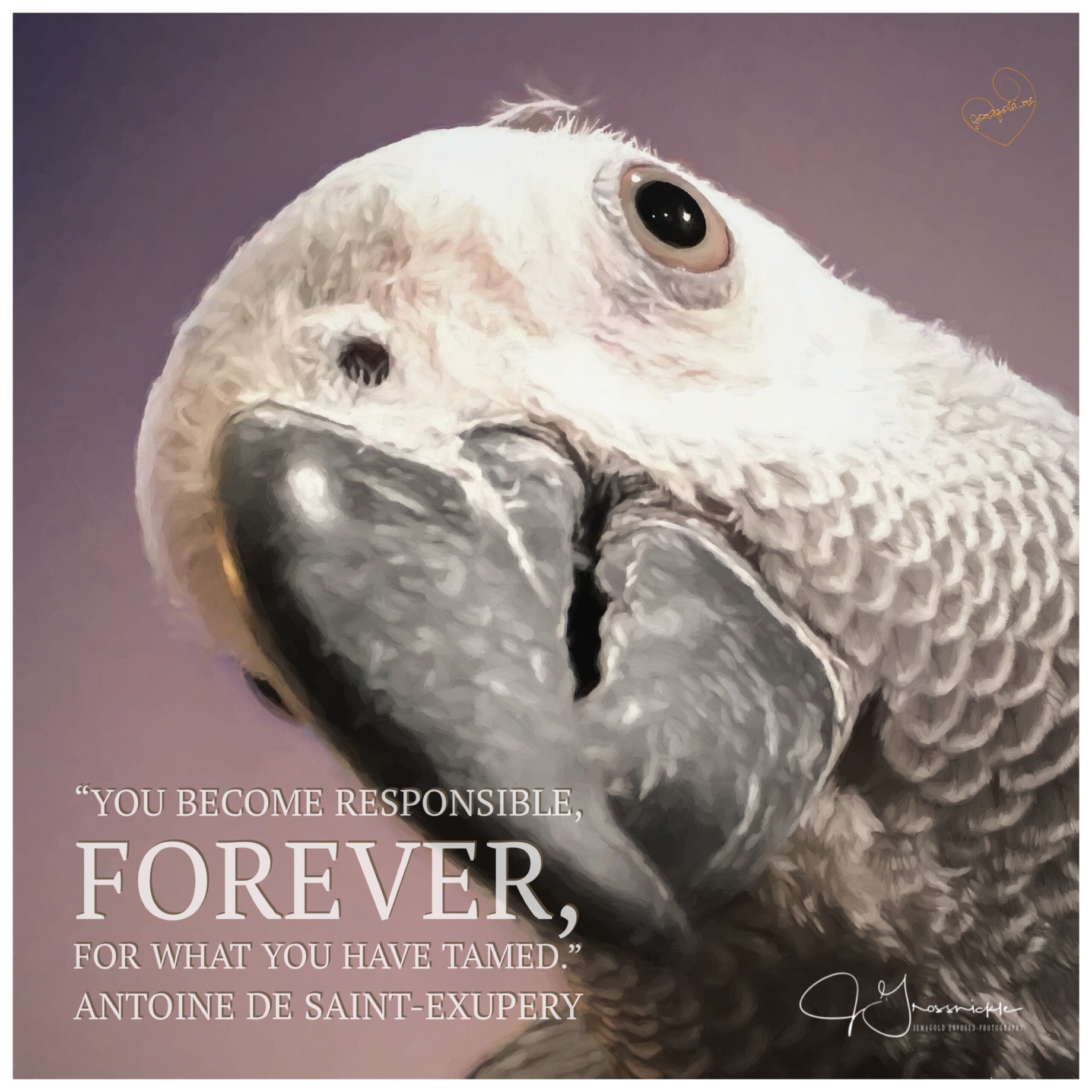 Kazoo, my African Grey parrot, has a fuzzy history in his very young life. From what I can piece together, although I will never be 100% positive, this is what I was told…

Kazoo was sent to a retailer partially weaned to be fully weaned then sold. He was purchased by an older couple who took him home then was ignored when one of them became ill. He was returned to the retailer cage-bound and aggressive. And then I came along!

Kazoo is still young and with that in mind, I “think” I can tame him into being a good “pet”. While I can’t undo his early beginnings, my hope is to try to repeat the things he should have had done to promote a well-adjusted bird.

I was bit several times by Kazoo when I initially tried to handle him. (He is a “he” through DNA sexing.) But when wrapped in a towel, Kazoo thoroughly enjoyed “cuddling” and being “scritched” (a type of petting on his head, around his ears and under his beak). It was because of this behavior that I thought I could get him to “like” people again; to be able to trust his needs would be met?

Kazoo LOVES his new cage filled with interactive toys and chew things. I’ve helped parrots in the past; ironically I just donated huge boxes of “toys” I had stored for years. Now, I am re-purchasing similar toys for him to interact/play with. I really had no intention of ever needing those boxes of toys again; life can be so ironic! 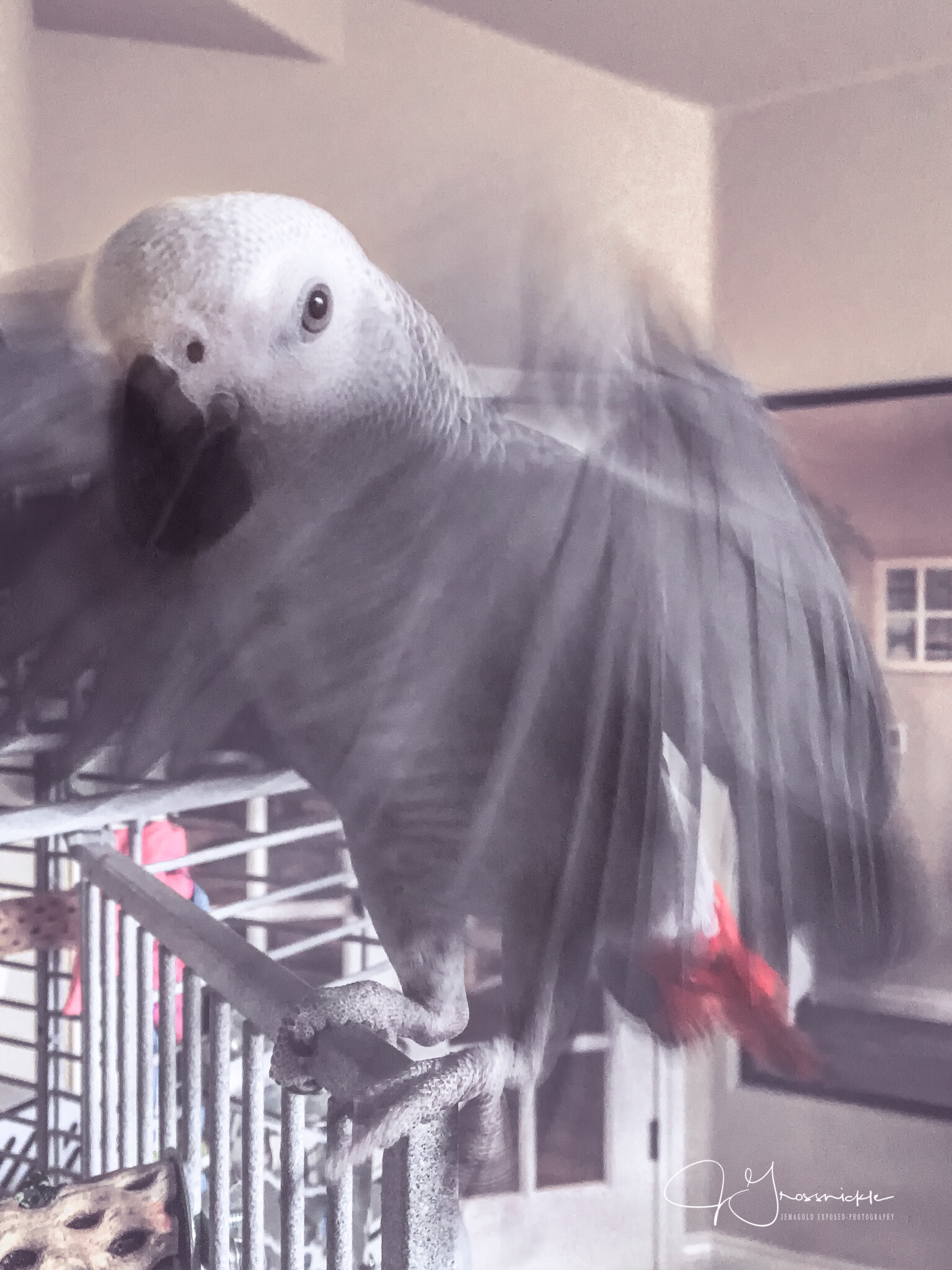 Kazoo also comes out of his cage on his own. He loves to flap his wings on top of the cage and now that he knows me, he will come running to be scritched! For a bird who doesn’t mind my hands scratching all those itchy spots; spots he can’t easily reach, it amazes me how afraid he is of my hands near his feet? So I gently touch/stroke his feet which made him growl at me. Now, I can touch those toes and at least he doesn’t growl… usually!

Kazoo HAS flown off the top of his cage but with his clipped wings, he can’t get very far. He mostly glides to the floor and seems surprised that he has done this? Through patience and practice, I’ve “rescued” him from off the floor which is a very scary place for a parrot to be. Now, Kazoo will walk towards my outreached hands and “step up”.

Step-up training is huge! He was taught this once; it just hasn’t been reinforced in a very long time. Again, he initially growled when I asked him to “step up” but now he is doing it, off the floor, without growling. As a reward, I am using my other hand to scritch him; this is his most favorite thing.

I’ve also gone back to “hand-feeding” him. He LOVES the baby bird formula and readily takes this from a bent spoon curved and cupped to match his beak shape. He will also take food from my hand; another sign of “trust”. 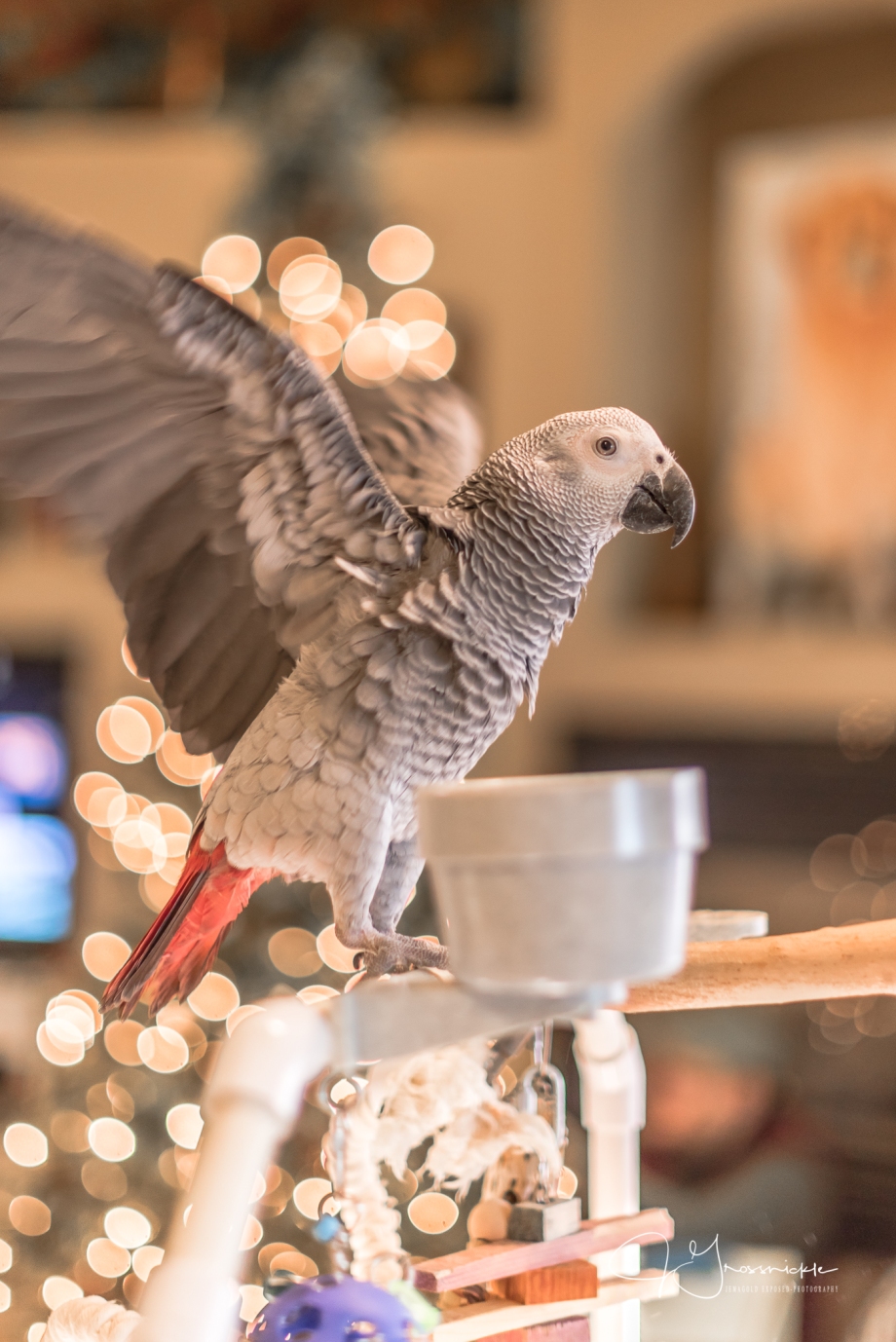 This past weekend, I tried to get Kazoo into the shower. African Greys need regular bathing to help control the dust they produce. It was a new place thus a scary situation for Kazoo but I was at least able to get him to perch on the shower perch and while not “bathed” in water, he did get the chance to appreciate the humid, steamy experience. Baby steps! Maybe next time I’ll actually be able to get him wet?

Yesterday, he and my 31-year-old Blue Front Amazon, Maybelline, came out to sit on play stands and “eat lunch” with us. Eating together is a very “birdy” thing to do so to have Kazoo nibble on the foods provided in the food bowl on the play stand was a huge success. Afterwards, he and Maybelline got to spend time on the play stands as we put up the Christmas tree and started decorating the house. Having become comfortable on the play stand, I wondered how he would feel when I took him back to his cage? I took Maybelline back first and within minutes, Kazoo did one of his flying acts and fluttered back into the bird room to follow us. He chattered his nervousness stepping up on my hand but he did step up. I was able to take him inside his cage without his flying off my hand when he saw the safety of his cage in front of us. From my hand, he stepped up onto one of his perches in his cage and was highly praised. All in all, it was a very good “out of cage” experience for Kazoo. 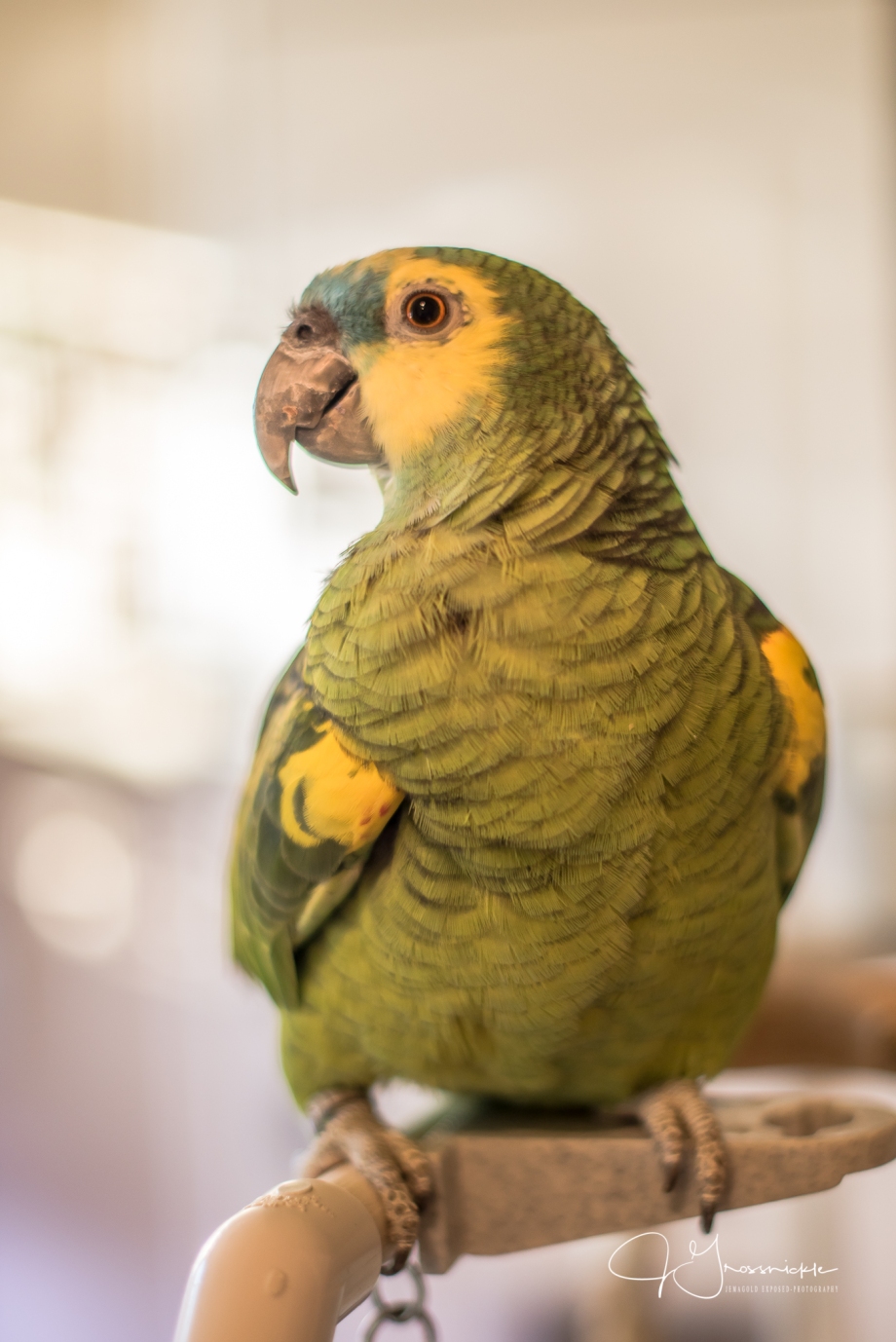 “Trust” is a huge thing for any “prey animal” to give. It doesn’t happen immediately especially when that animal has not had positive experiences trusting previous care-givers. In Kazoo’s case, it is just going to take time. And respect in understanding that he is not that once baby bird that gave his trust once and wasn’t well-treated. I can’t change the past but I can prove that his trust now is not misplaced. Slowly but surely, that is the plan! 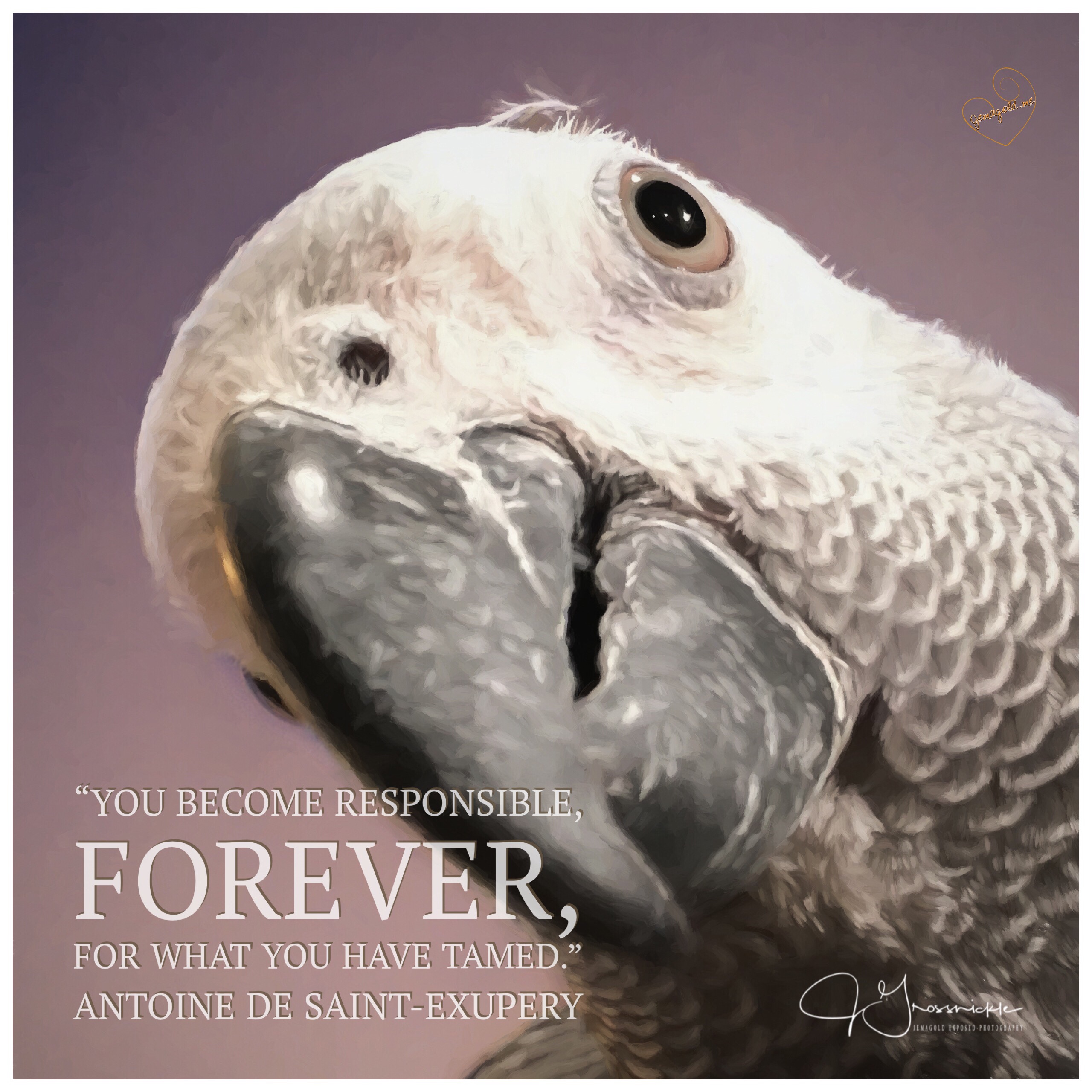